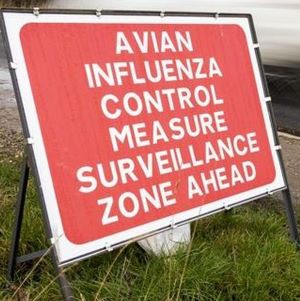 The UK is in the midst of an outbreak of the highly infectious viral disease, Avian Influenza (AI) also called bird flu. In response, the Chief Veterinary Officer has imposed the legal requirement for all captive birds in England to be housed indoors, starting 7th November because the containment of birds indoors reduces the risk of transmission of AI between flocks. Importantly, flock containment also reduces contact between farm birds and infected wild birds that are free to roam.

The number of bird flu cases detected to date make the current outbreak the largest so far. The CVO’s decision is a nationwide extension to October’s mandatory housing measures that were restricted to a few locations in England.

In addition to physical containment of flocks, scrupulous biosecurity adds to the defensive strategy against AI. Veterinary healthcare disinfectants with proven antiviral properties should be deployed to key avian-related environments in order to interrupt the cycle of viral transmission.

Follow this link to view market-leading anti-influenza disinfectants, manufactured by Mirius-Coventry Chemicals, and assessed and approved by the UK Government’s Department for Environment Food and Rural Affairs (DEFRA) for use against Avian Influenza.